We offer high speed cameras, rental of them, and consultancy filming.

Typical use of these cameras is that a fast event is to be studied in detail. Normal cameras at 25 frames per second do not catch the even, but a high-speed camera that records maybe 1000 images per second will do. And at later playback, image by image can be viewed and details studied.

Mikrotron is a german producer of high speed cameras with good reputation. They develop small cameras with high sensitivity and low electronic noise. Mikrotron has a series of high-speed cameras named the Cube series ranging from affordable cameras for research, process control and reaching to cameras of 3 MP. Cameras with the new sensor type is called EOSense with drastically improved photo sensitivity. The senser area can be reduced both in horizontal and vertical direction, and the maximum speed with reduced sensor is some 280.000 frames per second. All these cameras in the Cube series communicate with the computer with Gbit Ethernet, a fast and reliable interface also over long distances.

Also from Mikrotron are machine vision cameras with Camera Link interface. These are small light sensitive that can be used for process controll and feedback loop applications. Special features is FPGA memory in the camera housing that can process the data before sending over the camera interface, e.g. the image can be binarized with adjustable threshold level in the camera itself. This means that data is reduced and can be transferred with higher speed.

Swiss-German Weinberger is a well-known producer of High-speed cameras, with a long history from the Stalex film cameras to the state-of-the art cameras for crash testing of cars, study of animals, study of sports techniques etc. These cameras come in mainly two different classes, of which the Speed CAM Visario is a very potent camera with brilliant color representation and resolution. In normal CMOS sensors the interpolation of pixels covered by red, green or blue filters causes often problems in pixel resolution, but for Visario the image quality is high also after zooming up. The image format is 1524x1128 pixels at 1000 fps, and reduced resolution up to 10.000 fps. The noise-less image enables a precise positioning of the markers, which gives good accuracy in motion tracking analysis. See the zoomed up example in the images below. 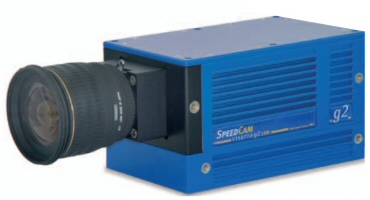 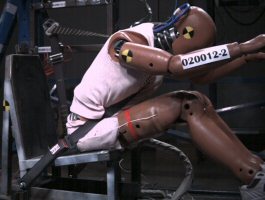 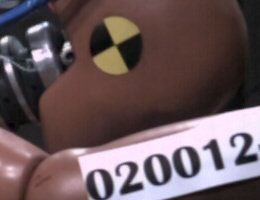 Weinberger has also the small and handy camera SpeedCAM MiniVIS, which comes in different versions of speed and resolution. The original version of MiniVIS is the Hi-G model, which is designed for on-board mounting on crash sleds. The models ECO2 has same performance but is not approved for high accelerations, and the ECO1 model has a limited resolution at 640x512 pixels at maximum speed 1000 frames/sec. 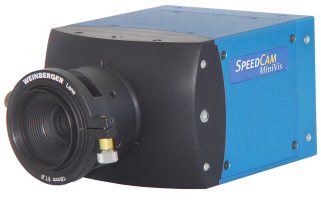 We also offer cameras that, except from normal high-speed capturing, also can be used for special situations. Such camera can be run in single frame or double frame mode.

Assume a case where the analysis base on the change between two images during a very short time. For an object moving quick through a small viewfield, the time between frames may sometimes need to be in order of microseconds, which corresponds to a frame rate of million frames/second. To avoid this problem, double-shutter function were developed. Then two images are captured with short separation, data transferred to memory during a long time, and again two images captured. By this method, sharp images with extreme short time separation can be made and for example catch details of supersonic motion etc.

Cameras for this application are Nanosense MKII and Nanosense MKIII, with 512x512 pixel at 5140 fps and 1280x1024 at 1040 fps, respectively. MK II goes up to 140.000 fps at reduced resolution. These cameras are for laboratory use and connect to the pc via USB.

For cases of short exposure times or experiments where excessive heat or light can not be used, (melting problems, biological testing etc) a camera with image intensifier may be needed. It could also be needed in cases where a physical process emitting UV or IR light, since an intensifier may convert the light so wavelengt which suits the camera sensor.

For the postprocessing and analysis of the motion captured in films, software to track the motion can be used in 1D, 2D and 3D, translation and rotation captured. This can be used to compare computer simulation with reality, or as documentation for complex motion schemes for sports studies etc. Data can be plotted, tabulated, exported in many formats.

Data can be taken from multiple cameras in different configurations, like stereoscopic viewing where 2 cameras look at an object with small angle (like our eyes) or when cameras are separated by round 90 degrees. Such different settings require a flexible software.  We offer software from Image System, who make programs for tracking, camera control etc. 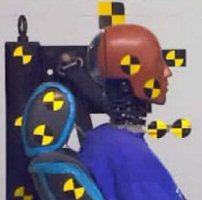 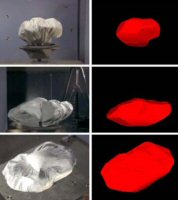 Images of software TEMA, Track Eye Motion Analysis, typical tracking targets on a crash test, and the 3D analysis of the expansion of an airbag.

For normal filming, common lights are halogene, HMI, Xenon lamps etc. Halogene lamps are often an economical choice, for many cases however DC lamps should be used to avoid flickering. HMI and Xenon has an order of magnitude more light per electric power, and is better when heat or electric power is crucial.

Many times a great improvement can also be made at the reflector and the optics of the illumination source. If light can be properly focussed instead of shading it off with slits and "barn-doors", all available light is used.

We provide illumination of many kinds, halogene, Xenon, HMI lamps, and continuous or pulsed lasers.